During these turbulent times, students and professors are actively engaged in politics, law, and thinking about the intersection of the two (and the places where the two should remain independent).  This engagement is necessary, but it is also fundamentally important that students and professors prioritize their apolitical duties of abstract and dispassionate critical reading, reasoning, and writing.  In that spirit, here is a fun practice exam hypothetical that I gave my students to prepare for their closed-book torts exam on Friday.  The actual exam essay is much longer and more convoluted, but this allows students to practice tackling claims systematically.

Answers will be up tomorrow!

END_OF_DOCUMENT_TOKEN_TO_BE_REPLACED

Happy Thanksgiving!  I am extremely thankful to be an American, always.  If my great grandparents had not moved to this county, my family on both sides would have perished in Europe (and many did).  That said, some of the things that I believe distinguish this country as exemplary are eroding, and all of us, of every political stripe, can help alleviate our current political crisis.

END_OF_DOCUMENT_TOKEN_TO_BE_REPLACED

This blog post is the second in a series on Lee v. Tam, a case involving whether the Patent and Trademark Office (PTO) can deny registration to a trademark for the dance-rock band “The Slants.”  The first part of this series provided an explanation of trademark registrations and a broad overview of the weighty legal question that the Supreme Court will confront in Lee v. Tam.  This second part of the series addresses the difficult issue of how much control the government can constitutionally exercise over speech, especially speech that many find offensive, to which the government extends legal benefits.  Later blogs will cover other issues explored by the merits briefs and amicus briefs, questions by the Justices during oral argument, and larger implications for the intersection of free speech rights and government power.

The briefs have been filed on the Petitioner PTO’s side in Lee v. Tam, and there are a number of excellent arguments made by the PTO and amici.  One of the most intuitively compelling of those arguments, made in the PTO’s brief, is that Congress should be permitted to “create an optional program of federal trademark registration without opening that program to racial slurs and other disparaging marks.”  In other words, Congress should be permitted to grant the benefits of trademark registration as part of a government-funded program only to those who do not use racially disparaging trademarks.

Although this is a difficult and nuanced issue, I believe this argument should ultimately be unavailing.  Yes, trademark registration is a government benefit, and the government may wish to disassociate itself from offensive trademarks.  However, the government cannot constitutionally discriminate on the basis of viewpoint in ways completely unrelated to the purpose of trademark when administering its registration benefits.  During a time when many in this country are concerned about authoritarian government control and abridgment of First Amendment freedoms, granting the government the power to regulate speech (even offensive speech) based on a loose government association with the speech will corrode free speech rights in many areas beyond trademark registration.

END_OF_DOCUMENT_TOKEN_TO_BE_REPLACED

The next post in the Series on Lee v. Tam will be coming ASAP.  (Petitioner PTO has now filed its brief.)  But, I want to address a more timely issue in light of the surprising election results and the response engendered by those results.

A state Senator from Iowa is planning on introducing legislation he calls the “suck it up, buttercup” bill.  The proposed legislation would subject schools to punitive budget cuts if they use state funds to administer election-related grief counseling beyond the normal mental health services offered.  Republican Bobby Kaufman, who plans to introduce the bill in January, also seeks to add criminal penalties to punish protesters who shut down highways.

The Washington Post article reporting on the proposed legislation was sent to me by a former coworker who noted the parallel between the “suck it up” phrasing and one of my law review articles.  My article, Emotional Duties, establishes a duty to reasonably regulate one’s own emotional well-being before he/she can sue in tort (which colleagues refer to jokingly as the “suck it up doctrine”)  — partially in order to harmonize tort law with First Amendment doctrine.

Despite my view that schools are trending in a direction that is solicitous to students’ emotional needs in a way that underserves both students and society, I do not believe this sort of bill should pass.  The bill interferes with a school’s prerogative about how best to educate its students and thus compromises core academic freedom values.  There is a constitutional dimension to academic freedom such that the bill may even rise to the level of a First Amendment violation.

END_OF_DOCUMENT_TOKEN_TO_BE_REPLACED

This will be my last blog until a few days after the election, when I will return with the next in the series on Lee v. Tam.  (Go VOTE!)

Neil Patrick Harris sings a wonderful, lambasting yet humanizing song, created by Frozen songwriters Kristen Anderson-Lopez and Robert Lopez, about the mixed emotions of House Speaker Paul Ryan.  NPH’s Ryan promises to “be there to pick up the pieces” when his Republican Party returns after the nightmare of Donald Trump.  (“Now that guy is calling me a wussy/ I wish I could grab him by the lapels.”) The song is a treasure and has gotten a lot of play, including on This American Life.  Unfortunately, the song misunderstands an important distinction in constitutional interpretation.

This distinction – between a court’s failure to find a constitutional right with which to nullify a law and the court’s nullification of a law based on a constitutional right- is conflated frequently by the media.  Conflations of this nature lead to an overemphasis on a case’s result and unnecessary cynicism about the politicization of the Supreme Court.  This is not to say that results never matter and that Justices pay attention only to reasoning when deciding cases.  However, public misunderstanding about the posture in which a court confronts a case leads to judging a case only by the results and not its reasoning.

END_OF_DOCUMENT_TOKEN_TO_BE_REPLACED

My views about Justice Scalia, unlike his own views about constitutional meaning, constantly evolve.  On Friday, the Supreme Court Bar held a memorial to honor Justice Scalia’s life and legacy that inspired me anew to reflect upon the Justice, his contributions, and his shortcomings.  I highly recommend that both skeptics and disciples of Justice Scalia (and everyone in between) watch the memorial, where former clerks from law practice, legal academia, government, and the judiciary all shared their experiences with the Justice.

Below are the aspects of Justice Scalia’s influence that I hope will not be lost with his passing.   Although I would not want a Court of nine Justice Scalias, I hope that each Justice, and especially anyone who replaces Justice Scalia, will continue his legacy in the following areas.

END_OF_DOCUMENT_TOKEN_TO_BE_REPLACED

This is a nonpartisan blog. I have been critical of President Obama’s views of constitutional law and executive power. I thought it especially damaging to the integrity and independence of the Supreme Court when Obama chastised the Court and angered the public with an oversimplified depiction of Citizens United.  But, in this post, I offer nothing but respect to President Obama for accomplishing something fundamental to the survival of our constitutional democracy.

Obama models the importance of free speech values. Both the substance and the style of his communications to the nation exemplify many of the values that give meaning and legitimacy to our First Amendment freedoms.

END_OF_DOCUMENT_TOKEN_TO_BE_REPLACED

A University of Oregon Law professor has been placed on paid administrative leave for dressing in blackface at an off-campus Halloween party attended by faculty and students.  Her intention was to portray the author of a book, Black Man in a White Coat, which chronicled the racism the author, Dr. Damon Tweedy, experienced as a student at Duke Medical School.  A letter written by 23 faculty members has asked for the professor’s resignation, and a petition signed by over 500 students and alumni supports that push.

END_OF_DOCUMENT_TOKEN_TO_BE_REPLACED

On Tuesday, I will be voting for President.  Although I am less politically engaged than the median law professor (to me, politics necessitates partisan, unprincipled, opportunistic behavior, and the law, at its best, manifests beautiful, clear, logically evolving rules), this election is too important.  Plus, I am now an Ohio voter.   I will even encourage students to accompany me to the nearby polling place so they can vote.  But I will not be sharing with the students the candidate for whom I am voting.  I will not even express pleasure or displeasure at the election results, despite the fact that I believe this election is both symbolically and practically monumental.

END_OF_DOCUMENT_TOKEN_TO_BE_REPLACED

Can you find all of the torts references in this costume?  Answers below. 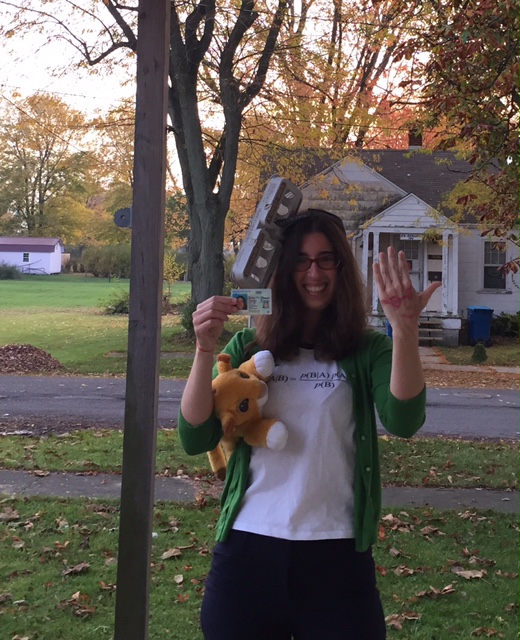