Halloween is my second favorite holiday (after April Fools’ Day).  In prior years, I have dressed as the standard of review “abuse of discretion” and the exception to but-for causation for “multiple sufficient causes.”  Can you guess my costume this year? 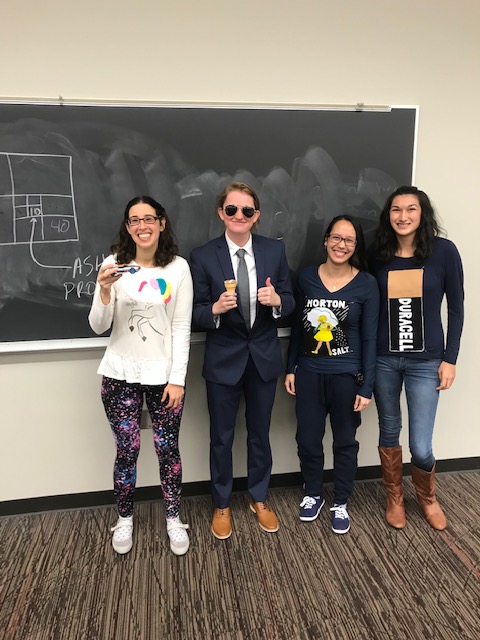 END_OF_DOCUMENT_TOKEN_TO_BE_REPLACED

The Federal Bureau of Investigation (FBI) received an anonymous letter that a judge currently serving on the federal court of appeals in Cincinnati took a large bribe from the writer of the letter.  According to the letter, the judge, Karl Kaspian, used to live in a small home and now lives in a mansion and wears fancy jewelry.  FBI agents checked housing records and noticed that Judge Kaspian had recently moved from a modest neighborhood to a wealthy gated community.  An undercover agent sat in the Judge’s courtroom and noticed his wearing a fancy watch and ring.  After the day’s court proceedings were over, the FBI agent observed, and seized, a diamond ring that Judge Kaspian had dropped on the floor on his way out of the courthouse.

Four FBI agents then surrounded Judge Kaspian inside the parking garage of the federal courthouse in Cincinnati.  The agents’ guns were visible in their holsters, but they kept enough distance so Judge Kaspian could get to his car.  The agents asked Judge Kaspian if they could search his car, and the Judge said yes.  Inside the car, the agents found records of many bribes Judge Kaspian had taken.  At his trial for corruption, Judge Kaspian seeks to exclude (1) the diamond ring and (2) the evidence from his car.  What is the likely result?

END_OF_DOCUMENT_TOKEN_TO_BE_REPLACED

Three academics looking to emulate scholars in the fields they describe as “grievance studies” (gender studies, critical race studies, fat studies) pulled off a stunning hoax.  These academics managed to publish several papers in serious academic journals even though the papers made absurd claims based on unsound methodologies.  One published article, for example, was about rape culture in dog parks, and another – which was ultimately not published but received favorable reviews – suggested chaining up and silencing white students in order for the white students to “experience reparations.”   What the papers had in common was that they confirmed the worldviews and aims of the journals – in particular, the papers sought to elevate the voices of those with less power in order to dismantle power structures.

END_OF_DOCUMENT_TOKEN_TO_BE_REPLACED

Reasonable minds can differ on whether Judge Kavanaugh sexually assaulted Dr. Christine Blasey Ford.  Perhaps Judge Kavanaugh is lying, or perhaps he does not remember the incident.  Perhaps Dr. Ford is lying, or incorrectly remembers either the identity of the assailant or the severity of the interaction.  These events happened over three decades ago, and there is little evidence besides the directly contradictory testimony of both parties, both of whom have significant inconsistencies in their accounts.

Reasonable minds can also differ on whether Judge Kavanaugh displayed such intemperate and partisan behavior that he forsook his duty to appear impartial.  Personally, I am more concerned by what may be lies under oath than his understandable anger, but I appreciate those who believe his confirmation would further erode the legitimacy of the judiciary.

Where I think we reached unreasonable levels is in our projection of all of our perceived social ills onto Judge Kavanaugh.  Many have assumed that if we confirm Judge Kavanaugh, their own stories of trauma and abuse will be erased.   Perhaps this was so when the Senate refused to pause even for an FBI investigation of the allegations of Dr. Ford, but it is not true now.  Judge Kavanaugh did not assault us all, and he is an individual who deserves individual consideration.  Assuming his anger is entitlement because he is male, or promoting the idea that we should automatically believe all women who charge others with sexual misconduct, simply because so many women are telling the truth, is a recipe for abandonment of our most cherished principles.