Although designed to protect competition, false advertising law protects consumers from our own ignorance.  This somewhat paternalistic approach is evident in the lawsuits against Chobani by Dannon and Yoplait.  Chobani’s competitors claim that Chobani falsely advertised that Dannon’s artificial sweeteners and Yoplait’s preservatives are unsafe.  Chobani tried to capitalize on our collective distrust of artificial ingredients, and a federal court has intervened.  These lawsuits illustrate our current thinking on the “marketplace of ideas.”  Unfortunately, the intersection of the commercial context and the First Amendment demonstrates that the law actually does not believe in the public’s ability to uncover the truth.

When it comes to the literal marketplace of ideas, we presume consumers need extra help getting to both the factual truth and the correct interpretation of those facts.  In the political and entertainment arenas, we let the public duke out the veracity of information.  Because commercial speech receives less First Amendment protection, false advertising laws can restrict speech not only if it is false, but even if it is true but misleading to consumers.  However, many of the reasons for the permissibility of greater restrictions on speech in the commercial context are equally applicable in other contexts.   Perhaps, then, commercials should be entitled to greater speech protection, or other areas should be constitutionally regulated more.  I hesitantly believe the current divide is sensible.  Although our distrust in the marketplace of ideas may be warranted (in some cases), the autonomy rights of both speakers and listeners are much greater in contexts outside of the commercial arena.

One federal judge, in two separate lawsuits, has issued preliminary injunctions against Chobani for misrepresenting the health risks presented by the products of two other yogurt brands, Dannon and Yoplait.   Judge David Hurd, in the Northern District of New York, granted these temporary, pre-trial orders because it was likely that a jury would find that Chobani ads contain the false message that Dannon Greek yogurt and Yoplait Greek 100 are unsafe to consume.  According to the district court, even though Chobani’s statements may be literally true, the implication that the yogurts are unsafe is literally false.  In both cases, Chobani’s defense of “puffery,” or the use of inflated sales statements that do not actually deceive consumers, was rejected.

Chobani Greek yogurt contains natural-non-GMO ingredients, which are popular with the female demographic to whom it is primarily marketing.  Chobani’s Simply 100 ad campaign warns consumers that Dannon Lite and Fit Greek yogurt contains sucralose, which has “chlorine added to it.”  Sucralose contains chlorine bonded to hydrogen and oxygen, just as milk or table salt does, whereas the chlorine in your pool is a distinct chemical, calcium hypochlorite, which is dangerous if ingested. 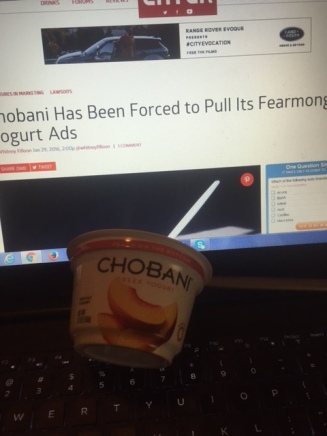 Similarly, Chobani’s ad campaign against Yoplait Greek 100 mentions that Yoplait contains sorbic acid, which is “used to kill bugs.”  Sorbic acid is a common preservative found in many foods and also found in pesticide products   Chobani uses the hastag “#NOBADSTUFF” to contrast itself to its competitors.

In other, non-commercial contexts, we assume that counterspeech will correct the misleading implications of speech, especially where nothing actually false is unsaid.  Courts protect speech against governmental regulation because we assume that the diffuse marketplace of ideas is better at getting to the truth than centralized, authoritative governmental regulators.  From this perspective, Dannon and Yoplait could have produced a counter ad that explained that their artificial ingredients were not unsafe.  Why not allow Chobani’s speech, get the information out there about sucralose and sorbic acid, and keep the marketplace of ideas churning?

What commercial speech regulation thus teaches us is that many people (including courts and legislatures) don’t trust the marketplace of ideas to actually yield truth, especially in the short term – but we allow free speech in an attempt to get to the truth anyway in areas we deem most important (like art, politics, and academia).  If the government regulates incorrectly in these areas, there will be both speech suppression and something akin to authoritative control.  In the commercial context, by contrast, courts deem consumers to have essentially forfeited their autonomy to get to the truth on their own.  It is true that this type of autonomy is not as important to us (perhaps because the history of regulations?).  We would rather have courts do the work for us, especially where there is an information asymmetry between seller and consumer.

Chobani is my yogurt brand of choice.  In fact, I ate a Chobani yogurt right before starting this blog post.  Chobani just sort of seems and tastes “healthier” to me.  But despite the amount of reading I do about nutrition, I still have a poor sense, except in extreme cases, about which foods are healthy.  The general public often displays shocking levels of ignorance; ask a chemist, and she will tell you that her pet peeve is people who fear “chemicals” in their food, when literally everything is made up of chemical compounds.  Perhaps the confusion over food health is one example of a failing marketplace of ideas, providing a rationale for courts to intervene.  Or perhaps our understanding of nutrition’s role in health is evolving at the best pace it can — the pace of science.  Science progresses to add knowledge of food safety, and this information trickles down to informed consumers, and eventually becomes general knowledge.

Perhaps science hasn’t yet figured out how to capture a potentially true intuition- that natural products and sweeteners are better for one’s health than artificial products and sweeteners.  Commercial speech protections do leave some room for some unproven speech.  Chobani is still allowed to tout its “natural products”- it’s just not allowed to disparage other brands artificial ingredients as unsafe.  This is partially because our false advertising laws are more about protecting the reputations of competitors, like Yoplait and Dannon, than they are targeted to protecting consumers.  Unproven puffery is permitted so long as it doesn’t implicate another brand.

2 thoughts on “Chobani vs Dannon and Yoplait: The Limitations of the Literal Marketplace of Ideas”