No matter your political affiliation, I recommend you watch CNN’s Chris Cuomo practically beg Presidential Adviser Kellyanne Conway to admit that President Trump lied about not knowing when Michael Cohen was paying Karen McDougal and Stormy Daniels to keep secret the affairs between Trump and the two women.  “The truth matters,” Cuomo implores.  President Trump’s lying about this issue, despite the fact that his former attorney Michael Cohen has an audio tape proving that the President is lying, erodes public trust in the integrity of our democracy and in the nature of truth itself.  Instead, Conway reiterates that the President said he is not lying, as if we should simply defer to the President’s word even when it is demonstrably false.  This “because the President said so” logic further undermines the strength of our democracy.  Perhaps worse, this logic undermines the elevation of truth as, in my view, the most important ideal of a functioning democracy and society.

Conway’s evasion and outright duplicity reminded me of others who unabashedly and directly lie, like Lance Armstrong, who repeatedly told the public that he did not take banned performance enhancing drugs but later confessed.  Romantic partners can lie, about everything from whether they took out the garbage to whether or not they are intimate with other people.  In order to allow for a clearer vision about how to talk about lying, below is a graph and a typology of the kinds of lies we tell, followed by an explanation of why I have categorized the lies as I have.

[Latest version of the graph] 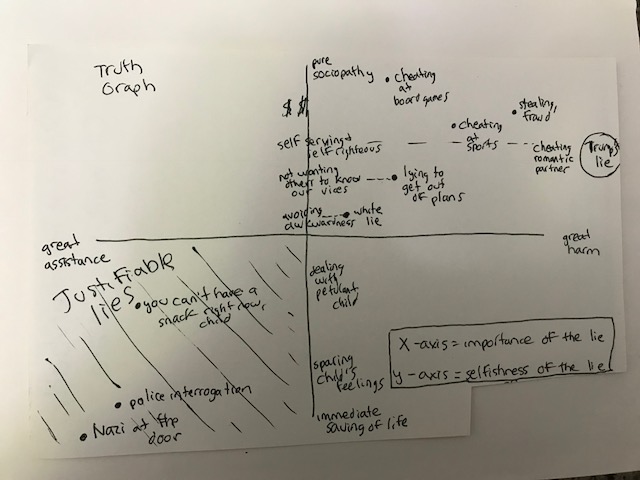 In this graphical representation of deception, the importance of the lie (or harm from the lie) is graphed on the X axis.  The selfishness of the lie is graphed on the Y axis.  You may disagree, but I believe basically all [edit, let’s say most] lies come from a place of selfishness.  Even white lies are intended to avoid awkwardness, the unpleasant feeling of hurting another’s feelings, and the fear of repercussions of doing so.  The only lies that are possibly altruistic are lies to children, who cannot handle or understand the truth in the same way as adults, and thus do not have the same moral claim to deserving the truth. [Edit:  some children may be able to “handle the truth” better than adults.  However, I am simply drawing a bright-line rule here based on the moral and legal distinction we make between children and adults in all aspects of life (and law).  For example, consider age of consent laws. Some 15 year olds may be able to handle physical intimacy than some 40 year olds, but we draw a bright line as a proxy because the line works at the extremes and we do not want an amorphous standard (a 10 year old never can). Lying to children is not always altruistic, or always acceptable, but adults have earned the right not to be lied to, whereas children do not have the same moral rights and responsibilities as adults.]

At the extreme end of selfishness are lies told for pure sociopathy, or manipulation of others, but I believe these sorts of lies are rare (except for you horrors who cheat at board games).  Instead, I think the most often told lies, and most harmful lies, are the self serving but self righteous lies.

Although I think basically all lies are harmful and wrong, lies justified by a sense of self righteousness may be the worst, most destructive form of dishonesty.  The magnitude of the harm may be different when cyclist Lance Armstrong repeatedly lies to the public about not using banned performance enhancing substances, when a spouse lies about not having an extramarital affair, or when the President lies about not knowing about Michael Cohen’s payments to Stormy Daniels until after the payments were made.  But the motivations are often the same.

Lying here comes from a place of deep selfishness yet also self righteousness.  The person doing the deceiving somehow convinces herself that it is fair and just to lie because the deceived does not deserve to know the information.  Kellyanne Conway refuses to admit that Donald Trump knew about his lawyer’s payments to Stormy Daniels, perhaps because she thinks that the President is treated unfairly by the media even when he does virtuous things.  Lance Armstrong thinks it’s okay to both use and lie about banned performance enhancing substances because everyone does it, so he is no worse than anyone else.  The sport is then just getting away with taking the banned substances.  A romantic partner justifies lying and cheating because he or she needed the affair, or it would hurt his or her partner to know the truth.  Ultimately, these are all serious betrayals, but because of a combination of the liar’s desire not to face the consequences of his actions and a false sense of justification, the lies are told.

Of course, other elements could have motivated these lies, like pure sociopathy or greed,  or even a desire for people not to know about one’s bad character traits.  A desire for people not to appreciate who we really are or why we are engaging in a particular behavior motivates social lies.  People lie to get out of plans because they don’t want their friends to know they would rather watch Netflix than see them at this paricular juncture.  Instead, we should face the consequences of our true natures; this will constrain us from bad behavior, and, even if it doesn’t, it will allow others to properly assess situations and make decisions with autonomy.

White lies are unfortunate because they compromise our ability to discern the truth.  If someone always tells you something nice, it will be hard to ever believe positive affirmations from that person.  For this reason, I prefer honest people to kind people.  At least with honest people, you can believe their praise (and everything else they say).  The two qualities, honesty and kindness, are of course not mutually exclusive, and we don’t have to share everything that swirls around in our heads — especially in professional situations.  Indeed, sometimes it is better and kinder not to share, unless you have a duty of disclosure or a duty of loyalty to a particular person.  But before you affirmatively utter words that are false, think about the effect this has on our prioritization of truth.  Respect for others, and for ourselves, require that we operate from a place of believing that it is wrong to falsely manipulate other’s reality to serve our own ends.  The best decisions are made when we have a correct understanding of the facts and an appreciation for our true natures and desires.  Information wants to be free, and the truth will save us all.

[Edit:  The graph does not represent my final views on this, but serves as a starting point to consider which axes matter.  I go back and forth on whether a one-off incident of stealing is worse than cheating in sports.  Cheating in sports undermines an entire value system based on the fairness of arbitrary obstacles, which is why it is placed as more harmful.  However, if fraud were common enough, we would not have confidence in monetary transactions, and that would obviously be more harmful.   Lying to those who are in some way as incapacitated as children — the intoxicated, the mentally ill – may be justifiable, but I am not yet willing to say that it comes from a place of altruism.  I did not intend to be conflating justifiable with altruistic, although I see why I have given that impression. I think most lies are not justifiable, no matter how altruistic — unless you know beforehand that the person would rather not know the truth. I think lies to children are more justifiable, even if selfish.  However, as a general rule, the less harm caused by a lie, and the more altruistic, the more justifiable it likely is.]

6 thoughts on “The Lies We Tell (Including the President)”